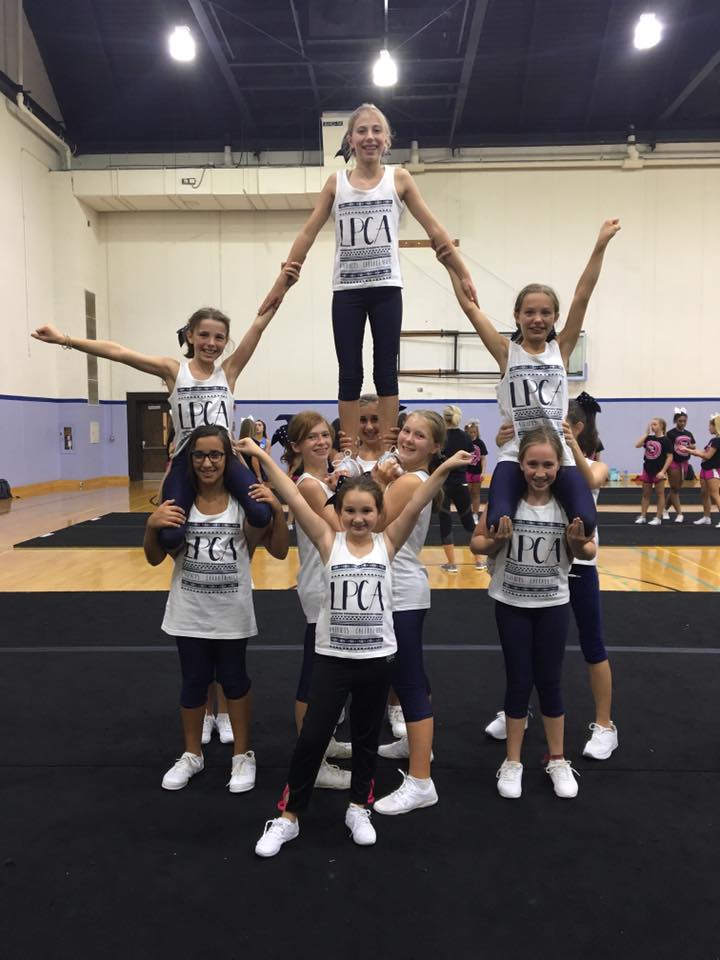 The LPCA Cheerleaders headed to Chapel Hill this past weekend to attend a UCA (Universal Cheerleaders Association) summer camp. During camp they performed rotations of cheers, dance, jumps, stunts, tumbling, and pyramids and learned a great deal in the short time they were there. Some highlights included Maree Doucette being named as Dance-off Champion and one of our stunt groups being crowned as Stuntfest Champions by holding an extended level stunt the longest for 2 minutes and 40 seconds! We beat 4 other high school teams in this competition and set the middle school camp record. Another highlight of the trip was hanging out with the UNC Cheerleaders and meeting Julia Vaughan-Jones who cheered for Coach Vetter a couple years ago and now cheers on the Tarheels. The team performed a new pyramid for the other campers, staff, and parents on the final day before being invited as a team to perform pregame at the Citrus Bowl in Orlando. Four of our cheerleaders also tried out and were named as Junior High All-Americans which allows them the opportunity to participate in either the Philadelphia or Orlando Thanksgiving Day parades. These girls were Katie Boyter, Evana Lawson, Nora Kelly, and Carsen Vetter. The team is very excited to get back to Mooresville and start working on mastering their skills to cheer on the volleyball, cross country, and soccer teams this fall and basketball players in the winter. They will also attend their first competition in school history on November 17th at the Carolina Championships in Greensboro. Go Patriots!

What makes our school special?  Teachers!  Here is a letter Mrs. Lindeman wrote to her…

Oklahoma, which was performed April 11-14 at the Charles Mack Theatre, was…

Why Do We Have School on Veteran’s Day?

Sometimes people ask why we have school on Veteran’s Day.  Due to our limited on…

Recent Posts
Find Us On Facebook
Ready to take the next step in your child's educational development?
Get Started Today