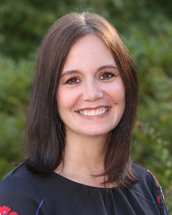 Bio: Tammy was born in Statesville, NC and grew up in Mooresville.  She graduated from UNC-Charlotte with her Master's degree in English Education in 2003.  After teaching middle school, she moved into a leadership position as an Instructional Facilitator.  She opened the first International Baccalaureate School in the Iredell-Statesville School district and became a school administrator in 2012.  She served in the Mooresville Graded School district as a school principal before joining Liberty Prep for the 2018-2019 school year.

She married her high school sweetheart, Josh and they have three children. Her favorite thing to do is to spend quality time with her family.  Some of the Russ's favorites include mountain climbing, amusement parks, and being active as a family.
Mrs. Russ is most excited about partnering with Liberty Prep to equip students for a globally competitive world in a Christ-centered environment.