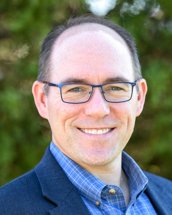 Dean of School - Dan moved to the Lake Norman area in 2010 from the Pittsburgh area. He is proud to have been with Liberty Prep since it opened doors in 2010 and enjoys his role as Dean of School. Dan has a background in education, having earned his Master's degree in Student Affairs in Higher Education from Indiana University of Pennsylvania and then spending the next 10 years working in Higher Education prior to joining the Liberty Prep team.

Dan grew up in Michigan, went to Michigan Technological University for his undergraduate degree, and met his wife, Amber in graduate school. Together they lived in several places in Pennsylvania, including the Pittsburgh area where Amber is from, before settling in the Lake Norman area in 2010. They love the area, don't miss the northern winters (at all...not even a little bit), and unless called elsewhere, plan to stay in the area. Dan enjoys being active in the pursuit of the calling in his life, which is part of the reason he came to Liberty Prep.

He and his wife enjoy traveling and time with family, as well as the outdoors, movies, reading, relaxing with friends, and their dog, Dexter.